This paper outlines Association of Electoral Administrators (AEA) views about UK bank holidays, including those only observed in devolved nations, highlighting issues around elections and electoral registration timetables, current legislation, and practice.

If an election timetable deadline falls on a dies non, the deadline is moved forwards to the next day that is not a dies non.

Except for applications for absent votes (Reg 56 RPR 2001), dies non are only excluded for registration timetable periods that extend up to seven days. For example, for a voter registration application, there is an initial five working day period (i.e. five days excluding dies non) where the application is listed and open to public inspection and can be objected to by any person. However, the application must then be determined 14 calendar days (14 being more than seven) before the monthly notice of alteration that updates the register.

For absent votes, dies non are excluded for all timetabled application periods.

However, dies non do not apply to the annual electoral register revision date as the RPA 19833 which sets out the timetable does not refer to them, which means where 1 December falls on a Saturday or Sunday, publication can go ahead at the weekend.

Elections –specific provisions governing timetable calculations are generally the same for all elections. Dies non disregarded for elections are:

At UK Parliamentary general elections, a bank holiday in any part of the UK is a dies non day (Rule 2(1A) PER11).

The table below lists all UK bank holidays for 2021. Shaded rows show dates affecting all nations. 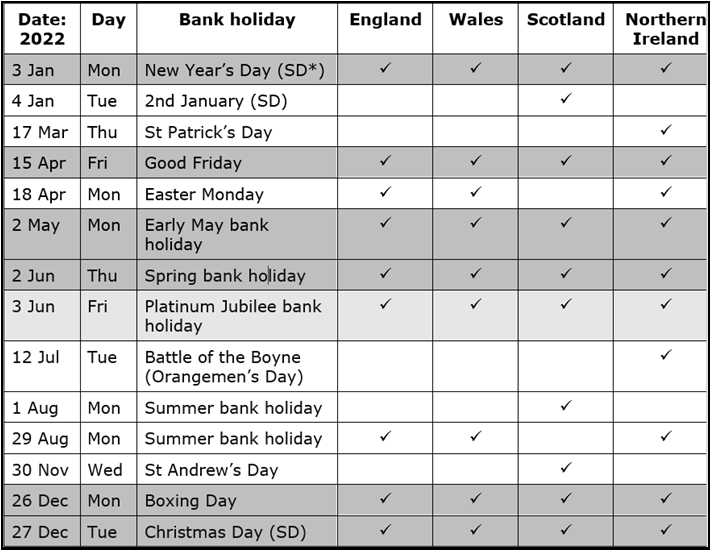 SD* = substitute day. If a bank holiday falls on a weekend, a ‘substitute’ weekday becomes a bank holiday, normally the following Monday or working day.

Bank holiday variations across the UK introduce an inconsistency of approach to calculating registration timetables at various points in the year.

Bank holiday variations across the UK pose a significant impact to UK Parliamentary general elections, as a bank holiday in any part of the UK is considered a dies non (Rule 2(1A) PER 12).

This happened at the 2019 General Election, when St Andrews Day in Scotland affected the timetable for the entire UK.

This happened at the 2019 General Election, when St Andrews Day in Scotland affected the timetable for the entire UK.

The St Andrew’s Day bank holiday in Scotland on 2 December 2019 fell within the timetable for the 2019 General Election.

This anomaly led to delays in confirming the timetable while legislation was checked. For consistency, the decision was taken to amend registration regulations in Scotland to bring them in line with those in England, Wales and Northern Ireland.

The impact of the bank holiday remained and meant the deadline to register to vote fell seven hours after the postal vote deadline rather than the usual 17 hours before.

Further complications arose in areas with local government casual vacancy elections outside Scotland. The postal vote application deadline for those polls was Wednesday 27 November, as the St Andrew’s Day bank holiday only applied to the general election timetable.

Having two registration deadlines on the same day created significant issues for administrators and confusion for citizens. Urgent processing of registration applications to issue final poll cards, and postal vote application processing, had to be administered at the same time. It also led to electors who applied for a postal vote before the deadline, but who did not register to vote until after 5pm on 26 November, not being allowed to vote by post.

In our 2019 post-election statement we made the following recommendation:

We believe that legislation should be amended so that all UK bank holidays, including those only observed in devolved nations, apply to all elements of the election and electoral registration processes. This should include timetables for national polls and associated local government casual vacancy.

1 The Representation of the People (England and Wales) Regulations 2001

3 Representation of the People Act 1983

The Association of Electoral Administrators was founded in 1987 and is the professional body representing the interests of electoral administrators in the United Kingdom. We are a non-governmental and non-partisan body with just under 2,000 members, the majority of whom are employed by local authorities to provide electoral registration and election services. Eleven regional branches of the Association cover the United Kingdom.

Further details on the legislative background connected to this policy position are available on request.